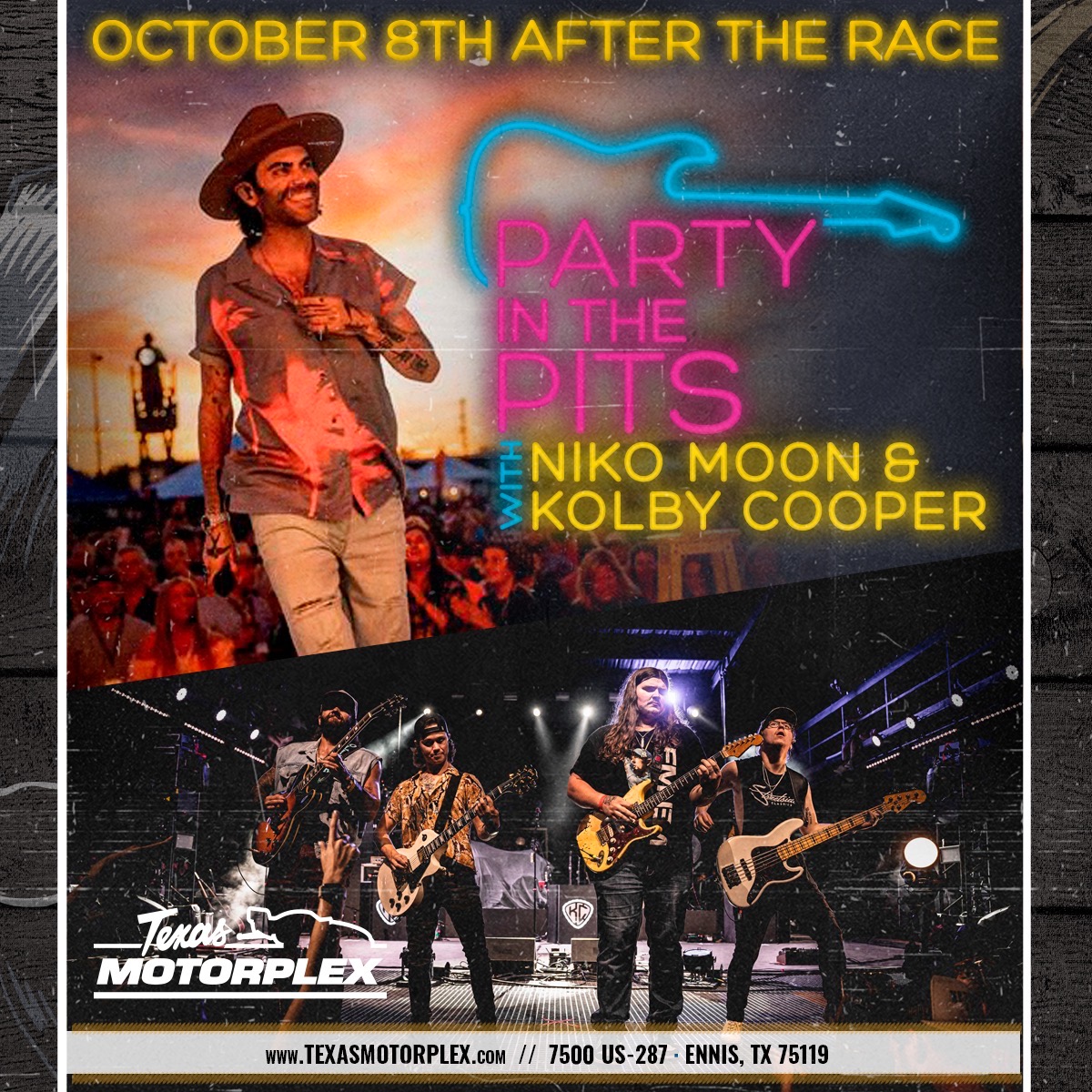 -Stampede of Speed weekend opens with throwback race and music-

ENNIS, TX (September 8, 2022) — The opening weekend of the 2nd annual Stampede of Speed will rev up with the series-ending Funny Car Chaos Finals followed by a high energy After Party in the Pits featuring country stars Niko Moon and Kolby Cooper on Saturday, October 8. Featuring ten days of racing events, concerts and special events the Stampede of Speed has quickly established itself as the must-attend for motorsports and music fans across the country. The Saturday program will feature some of the best Nostalgia Funny Car racing in the country followed by two rising stars in the country music scene.

“Hosting the Funny Car Chaos Finals is a great way to start the Stampede of Speed. We always say Texas Motorplex is where speed was born and these Funny Cars are a throwback to the history of drag racing,” said Christie Meyer Johnson. “The variety of race cars that will be on the track will be highly entertaining. Just walking the pits and seeing these cool looking Funny Cars is amazing. They are fast, wild and unpredictable so they put on a great show.”

Known as an adventurous artist, writer and musician Niko Moon wins over fans with an enduring optimism and a flair for challenging boundaries. His newest songs “Good Time” and “Drunk Over You” are quickly becoming favorites and will be featured on his fourth album set for release later this year. Kolby Cooper, a prolific songwriter has an uncanny ability to turn his and his friends’ life stories into relatable songs his rabidly zealous fanbase can’t get enough of, and his upcoming EP is no different, stacking the release with high-energy rockers, scorching break-up anthems and reflective love songs. Cooper has amassed over 113.5 million on demand streams to date.

“Wrapping up the race with a concert with Niko and Kolby will give the race fans a great treat,” said Johnson. “We are hoping some Niko and Kolby fans will come out early and check out the racing. We have put the schedule together to make it a seamless transition from racing to music so it will be a great event.”

Pre-race ceremonies will begin on Saturday at 1 p.m. and will lead into the first round of eliminations for the Funny Car Chaos Finals. The semifinals of Funny Car Chaos are scheduled for approximately 3 p.m. with additional classes of Outlaw Fuel Altered, Old School Back Half and Gassers running eliminations throughout the day. The final rounds for all classes including Funny Car Chaos will begin at 5:45 p.m. followed by the Jet Funny Car Finale and Winner’s Circle. The After Party in the Pits concerts are scheduled to begin at 7 p.m. with a spectacular fireworks show to close out the evening.

Tickets for Funny Car Chaos and the After Party in the Pits can be purchased here and more information about all the events surrounding the Stampede of Speed can be found at www.stampedeofspeed.com.