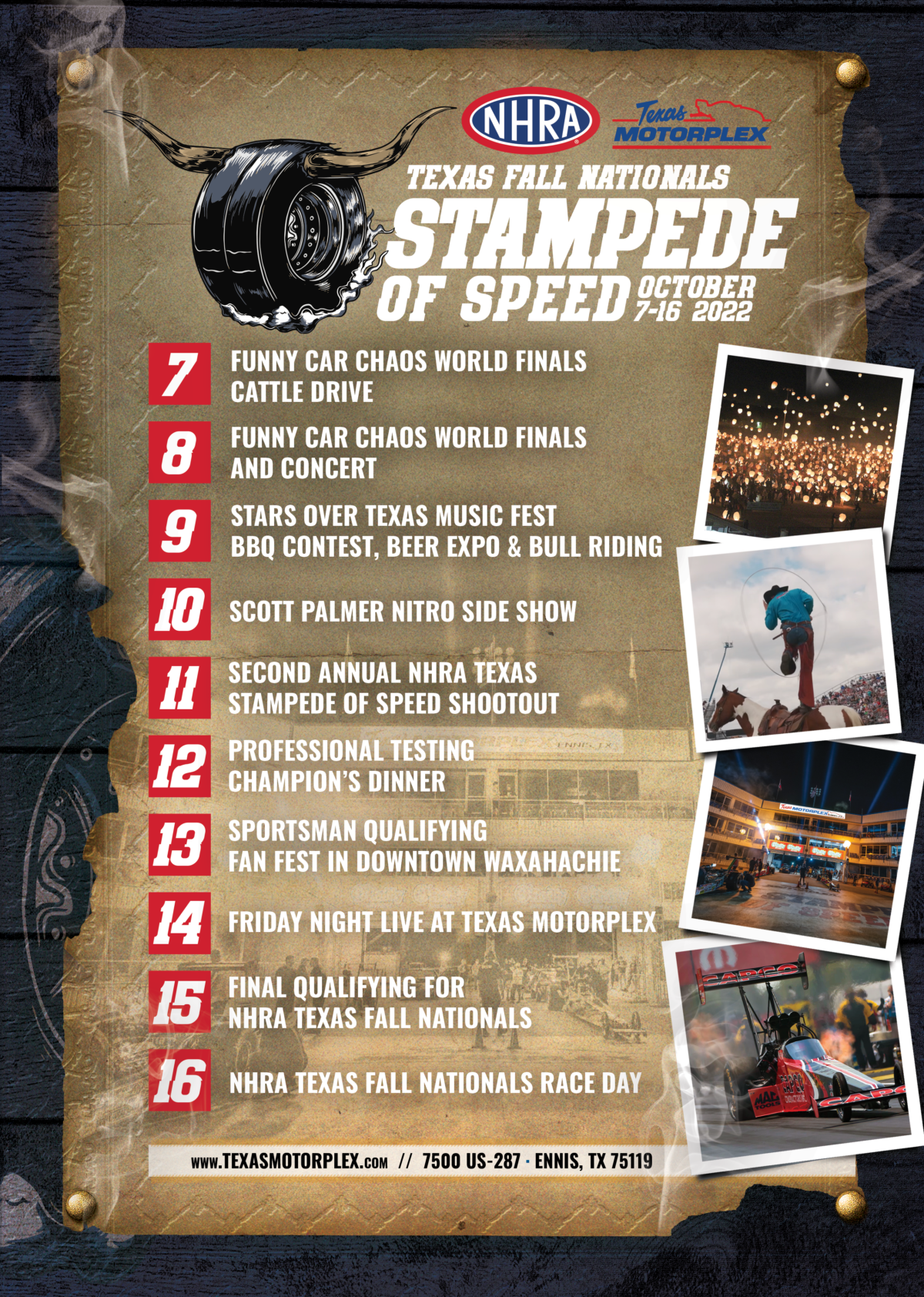 ENNIS, Texas (October 7, 2022) — For the second year in a row the historic Texas Motorplex, located between Ennis and Waxahachie on Highway 287, will host the premiere National Hot Rod Association (NHRA) drag racing event in the state of Texas — the Texas NHRA Fall Nationals as well as a multitude of motorsports and concert events across Ellis County. Millions of fans have experienced 330-mph races and have witnessed historic races between John Force, Cruz Pedregon, Greg Anderson, Steve Torrence and many more as they set records and amazed crowds. This year the Stampede of Speed, October 7-16, 10 days of racing events, plus two major concerts and a full day of professional testing will pump more money into the wallets of race teams from across the country than ever before.

“Last year we made history hosting a multi-day schedule of races and concerts,” said Texas Motorplex Co-Owner Christie Meyer Johnson. “We will be paying over $40,000 in low-qualifier bonuses on Friday night during the Friday Night Live event and on Sunday our race purse for the Texas NHRA Fall Nationals will be over $1 million for all the classes combined, including the largest payout for the Camping World Drag Racing Series.”

The Stampede of Speed schedule will include two days of concerts, Scott Palmer’s Nitro Side Show with Food Drive on Monday, professional testing on Wednesday where many of the NHRA Pro Stock and Pro Stock Motorcycle teams will be fine-tuning their race cars and motorcycles. Wednesday night the 2021 Texas Fall Nationals champions will be honored at a gala-style dinner with private concert and Thursday will feature the Pre-Stage Fan Fest with over 50 professional drivers and riders signing free autographs and mingling with fans.

In a true Texas tradition cowboys will drive over a dozen head of cattle along with special guests through downtown Waxahachie and around the historic courthouse to kick off the Stampede of Speed.

Friday/Saturday, October 7-8 – Funny Car Chaos World Finals and After Party in the Pits

Featuring the fastest and coolest nostalgia Funny Cars from the past four decades, the Funny Car Chaos Series will crown their national champions over this two-day spectacle of speed and racing fury. The race day will conclude with a pit side concert featuring country stars Niko Moon and Kolby Cooper

BBQ, craft beer and music will be the theme of the day as some of the best pitmasters show off their tasty delicacies paired with some refreshing cold beer from Metroplex area breweries. Before the country stars take the stage fans will be treated to a bull riding exhibition featuring some of the toughest riders and bulls in the area. Multiple musical acts headlined by multi-platinum country music star Brett Young, Wade Bowen, Shane Smith and the Saints, Elvie Shane, and Kylie Frey will entertain the crowd from the afternoon into the evening. A special lantern release will cap off this magical event.

This ticketed event will feature some of the wildest race cars on the planet as they try and set speed records and breathe fire as they roar down the track. The pits will be open for fans to get up close and personal with some of the most exotic race cars on the planet. The eye-opening, pulse pounding evening of racing will ramp up the excitement level for the week. To also give back to the local communities in Ellis County the event will feature a discounted ticket for every spectator who brings at least one food item to donate to either the Ennis or Waxahachie food bank as part of the Race to Feed the Finish Line.

Racing action will be the theme of the day as competitors from across the region race in the Stampede of Speed Shootout featuring Pro Mods, Top Dragster and a host of other high-performance racers. Door-slammers and dragsters will battle it out for bragging rights and the chance to hoist the Shootout trophy. Pro Mods from every association including NHRA will settle their scores on the track with a no rules, anything goes battle to be the quickest at the Stampede.

See Pro Stock, Pro Stock Motorcycles, Top Alcohol Dragster and Top Alcohol Funny Cars make test laps in advance of the NHRA Texas Fall Nationals. The stars of the NHRA Camping World Drag Racing Series will be on-site preparing for the fourth race of the NHRA Countdown. This open schedule test session is a chance for curious motorsports fans to get a taste of the high-speed excitement that will play out Friday-Sunday.

Join the 2021 Texas Fall Nationals champions Justin Ashley, Ron Capps, Greg Anderson and Matt Smith in a high-end dinner and celebration event in the Champions’ Club. The event will include cocktail happy hour, plated dinner the champions selected, photos and autographs, Q&A session, and special surprise for all attendees.

The wildly popular and free Fan Fest event will begin in downtown Waxahachie highlighting race cars interactive games, live music and family fun. A massive driver autograph session with over 50 drivers and riders will be the highlight of the evening with food trucks and kid’s games entertaining the crowd.

For the third year in a row Friday Night Live will turn the traditional qualifying schedule on its head as music, exhibition runs, circus fire performer Grace Good and a special guest DJ will surround the Friday night NHRA pro qualifiers as they try and run to the top of their respective categories at speeds over 330 mph in under four seconds. Over $40,000 in bonus money will be on the line with a free after-party on the starting line wrapping up the evening.

The last day for teams and drivers from across the country to make the highly competitive sixteen car fields will conclude on Saturday. Teams will only have two chances to make the show or be relegated to spectator status so tension will be high and the competition jumps to a new level as teams vying to be one of the lucky 16.

Following a massive opening ceremony the top drag racers from around the country will be racing to get one step closer to a world championship at the only playoff race in the state of Texas. Hundreds of thousands of dollars will be on the line as well as the chance for racing immortality. The pits as always will be open for fans to mix and mingle with the racers throughout the day. At the conclusion of the event fans are welcome to join the winner’s circle celebration on the starting line.