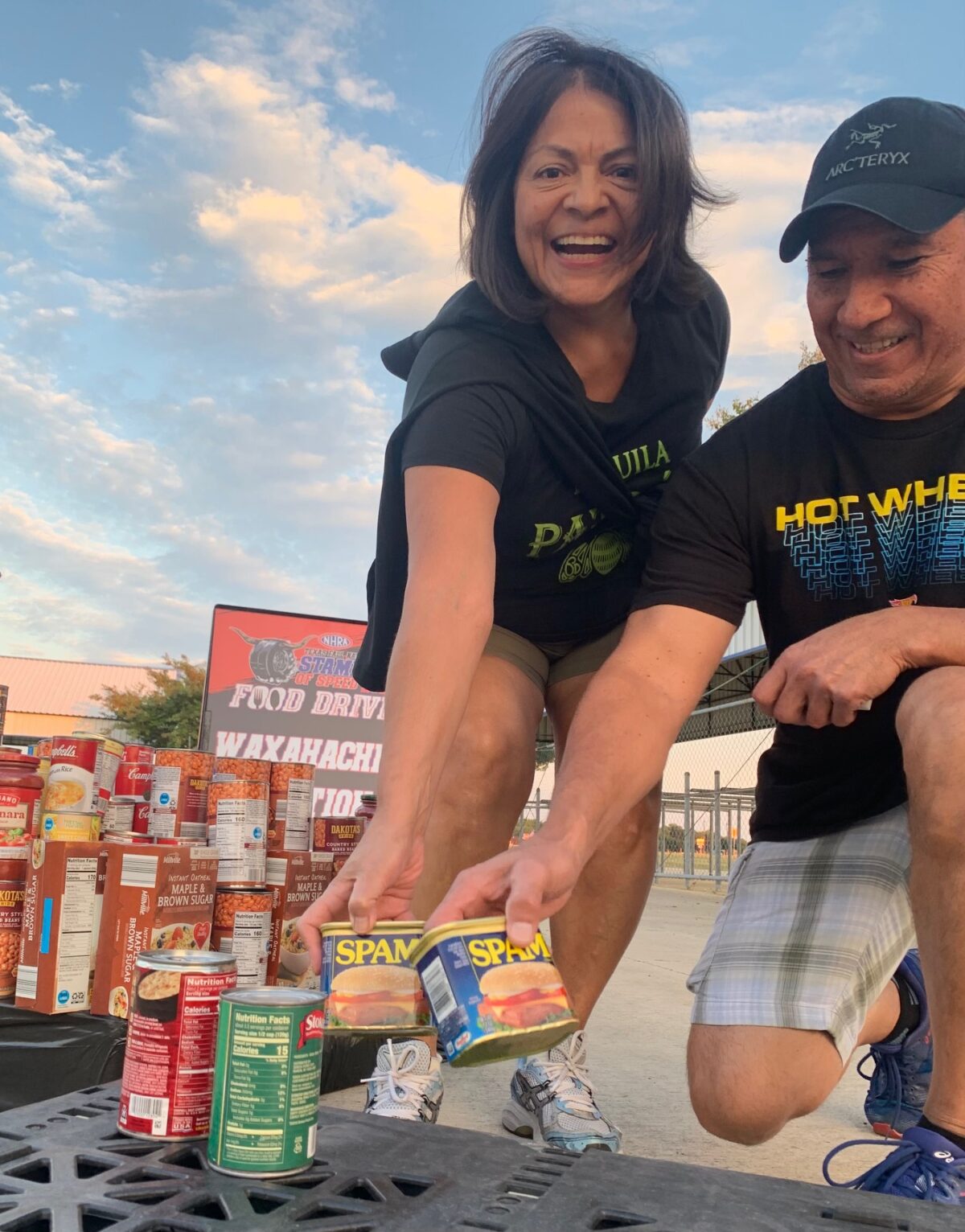 ENNIS, TX (October 11, 2022) — For the second year in a row NHRA veteran driver Scott Palmer shook the all-concrete racing surface at Texas Motorplex with an amazing mix of Top Fuel dragsters, Fuel Altereds, Top Fuel Harley Motorcycles and Nostalgia Funny Cars as part of his Nitro Side Show last night. The unique mix of cars and motorcycles racing in a variety of formats with massive burnouts had people on the edge of their seats. There was also a considerable amount of social media buzz during and after each of the Nitro Side Show racing segments. In addition to the on-track action fans got into the competition with the inaugural Race to Feed the Finish Line Ennis versus Waxahachie Stampede of Speed food drive.

“This was another step in the right direction to continue to grow the Stampede of Speed,” said Christie Meyer Johnson, Texas Motorplex co-owner. “Scott Palmer and his Nitro Side Show put on a great event. All the drivers and riders really pumped up the crowd and we added a car show this year, too, The Race to Feed the Finish Line was a success for the local community. We had no idea what to expect and we received over two pallets of donations from fans, staff members and race participants. We are excited about growing the Stampede of Speed food drive to continue to make an impact on Ennis and Waxahachie.”

Waxahachie took the inaugural Race to Feed the Finish Line title with the most food donated by approximately a dozen items. Located in the middle of Ellis County and building on one of the state’s strongest rivalries between Ennis and Waxahachie, Texas Motorplex hosted the Race to Feed the Finish Line for the first time this year. Fans who brought a canned and/or non-perishable food item to the Texas Motorplex received $10 off admission to the event. They made their donation in support of either Ennis or Waxahachie with the respective city’s food bank, Helping Hands of Ennis or Waxahachie Care, as they entered the facility.  Both organizations will be highlighted on track signage for one year as well as logo placement on Texasmotorplex.com. The food and cash donations were split evenly between Helping Hands of Ennis and Waxahachie Care.

“This was our first time seeing racing at Texas Motorplex. I can’t say enough about being able to come out early and get on the track for some promo videos,” said Wade Holman, Waxahachie Care Operations Director. “That was like nothing I had ever done. To see this racing live takes it to a whole new level. It is so much better than on TV. Being a part of the food drive just melts my heart to be honest. To see people give like that is very moving. This is the first year and to raise that much food in your first year is pretty good. We would love to keep doing it and build on it.”

“I think this went fantastic. It is awesome to work with folks in the community and we work well together,” said Korey McCrady, Helping Hands of Ennis Executive Director. “To see fans come out and bring goods that will support the community individually is going to help both areas. The family that these donations are getting poured into is fantastic. Like Wade said I think it is incredible to see what it could build up to next year and how many pounds of food can come in. Waxahachie won the battle of 287 this year so hopefully next year we get a chance to win again.”