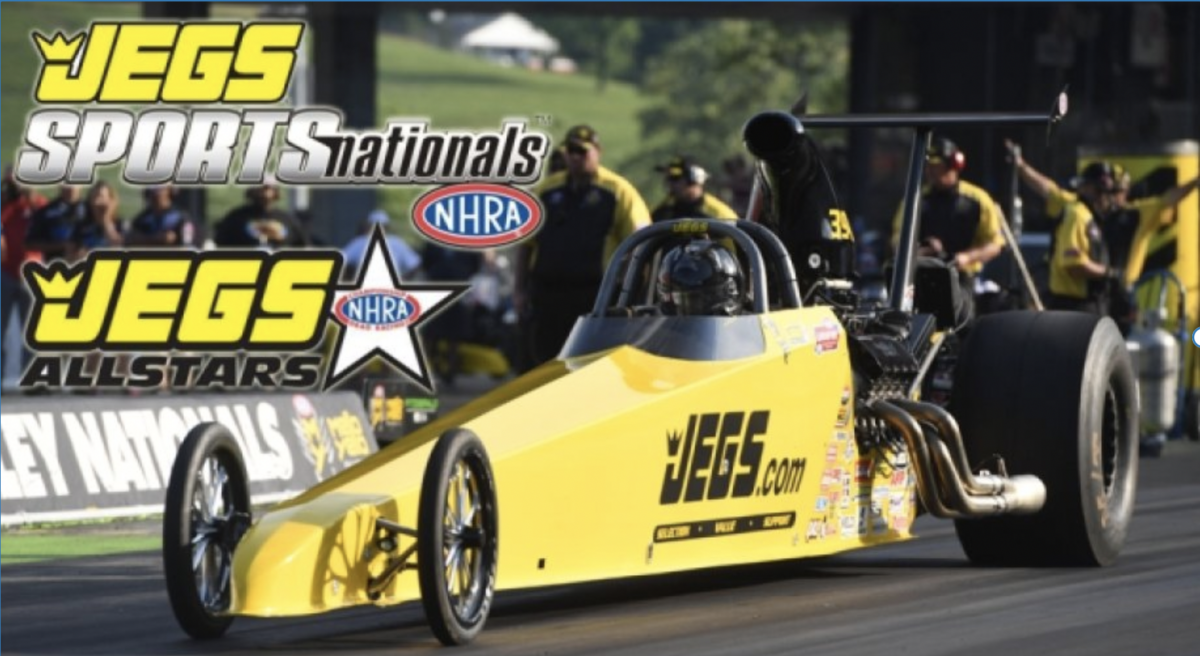 JEGS will continue as a partner of NHRA as part of a multi-year extension, including the continuation of the longtime JEGS Allstars and JEGS SPORTSnationals. The JEGS Allstars will move to Texas Motorplex in October as part of the Texas NHRA FallNationals.

JEGS, an industry-leading DTC, e-commerce retailer and distributor of high-performance automotive aftermarket parts and accessories, will continue as a partner of NHRA as part of a multi-year extension.

The long-term partnership includes the continuation of the longtime JEGS Allstars and JEGS SPORTSnationals, two popular events for racers on the NHRA Lucas Oil Drag Racing Series circuit. It was also announced that the JEGS Allstars will move to the famed Texas Motorplex for the first time as part of the track’s Stampede for Speed and the Texas NHRA FallNationals on Oct. 12-15 in Dallas.

The JEGS SPORTSnationals will again take place at National Trail Raceway in Columbus on July 12-13.

“The JEGS Allstars gives these racers a huge spotlight on a unique stage, and we’re excited to see this great event move to Texas Motorplex as part of the Texas NHRA FallNationals,” JEGS Vice President of Marketing Ralph Mondeaux said. “JEGS is committed to the racers on and off the track and making this great event better each year remains a major priority. By having it in Dallas as part of the track’s Stampede of Speed, it adds another standout addition to the event, and we know all the racers competing at the JEGS Allstars are looking forward to racing for team and individual titles at Texas Motorplex.”

Celebrating its 38th year in 2022, the JEGS Allstars competition is one of the most highly-anticipated events of the year for the standout drivers in the Lucas Oil Drag Racing Series. The unique event crowns individual champions in 10 separate eliminators, in addition to the overall team title. Racers can only qualify for the prestigious event by earning points in their home divisions during year-long battles in the following categories — Top Alcohol Dragster, Top Alcohol Funny Car, Competition, Super Stock, Stock, Super Comp, Super Gas, Super Street, Top Dragster and Top Sportsman.

The JEGS Allstars brings out the best from across NHRA’s seven geographic divisions for the special race, including competitors from all 50 states and internationally. Winning the legacy-building and prestigious race is a lifetime goal for all racers in the circuit and also adds another marquee, must-see event to the Texas NHRA FallNationals at the Texas Motorplex and their 10-day Stampede of Speed festival.

“Bringing the JEGS Allstars to the Texas NHRA FallNationals is a great addition to the Stampede of Speed,” Texas Motorplex Co-Owner Christie Meyer Johnson said. “Having so many of the top regional drivers and teams from all over the country come to Texas for this premier event will be amazing. We are excited to be highlighting some of the best driver talent in the country.”

The popular JEGS SPORTSnationals returns as part of a huge weekend at National Trail Raceway next summer. Last year, more than 600 drivers competed at the race across eight different categories, making it one of the top events of the sportsman season. Leading directly into a divisional and regional race on July 14-16 at National Trail Raceway, the JEGS SPORTSnationals kicks off a massive weekend of racing action, with a win at the special event offering significant prestige.

Winners receive a one-of-a-kind copper Wally branded with JEGS, with the event delivering one of the largest fields of cars in the Lucas Oil Drag Racing Series all season.

“We’re thrilled to continue our amazing partnership with JEGS and see these terrific events like the JEGS Allstars and JEGS SPORTSnationals continue well into the future,” NHRA Vice President and Chief Development Officer Brad Gerber added. “Both programs and events mean a great deal to the NHRA and our standout sportsman racers, and we’re excited to see the JEGS Allstars move to Texas Motorplex to make an already huge event even bigger and even more special.”